Water Supply and Drainage (VIO) is the supplier of water services in public water supply and sewage on the territory of the City of Zagreb and wider Zagreb area. VIO supplies water to the inhabitants of Zagreb, Samobor, Sveta Nedjelja and Stupnik municipality, companies Dukom d.o.o. – Dugo Selo, Zelinske komunalije d.o.o. – Sv. Ivan Zelina and Komunalac d.o.o. – Vrbovec, also performing services of wastewater sewage for the inhabitants of Zagreb and Sveta Nedjelja. VIO has certified laboratories that perform testing of the supplied water safety for human consumption and testing the quality of own wastewater. The official laboratories for control and monitoring the water for human consumption are in Hrvatski zavod za javno zdravstvo (Croatian Institute for public Health) and Zavod za javno zdravstvo (Intitute for Public health) Dr. Andrija Štampar. The quality of water supplied by VIO fully meets the requirements of the Regulations on the parameters of assessment and methods for the analysis of water for human consumption (OG No. 125/2013 and 141/2013).

Zagreb is a city on the water and one of many legends connected to it id famous because it involves water and the most famous Zagreb well – Manduševac. The legend says that "...the thirsty ban (viceroy) called out to the girl standing by the well: Mandušo, zagrabi! (scoop up!)" and so the name of the well is Manduševac and the city is Zagreb (Tkalčić, 1889). By the mid 19th century, Zagreb had a significant number of public and private wells, but during even a small drought there was a water shortage. The oldest preserved proposal for water supply of the City from the central waterworks, based on the supply of water from Kraljičin zdenac (Queen's Well), is back from 1774 but was not realized. The subsequent researches have proven that Medvednica does not contain sufficient drinking water for the City and so, based on the proposal of the engineer Melkus, it has been decided that the water is pumped from wells in the Sava valley. The construction works on waterworks began in 1876, after almost a hundred years of negotiations and debates.
The opening ceremony was on July 7th, 1878, in the presence of dignitaries and numerous citizens of Zagreb. In those times, the water supply system supplied 11,500 inhabitants with water, ad today there are more of 900,000 of them, or 93%.
The beginnings of the construction of the sewerage system in Zagreb are in the 17th century, when the old documents mention sewerage ducts for settlements Grič and Kaptol. The systematic construction of the sewerage begins in 1892 and developed with the City. Today, 88% of the inhabitants are connected to the public sewerage system.

The activity of Water Supply and Drainage is the basic condition for the life in the city and its further development and therefore the basic objectives of VIO in 2014 are: preparation of the project "Zagreb – development of the water supply and sewage system" for obtaining funds from EU funds, expanding the public water supply and public sewage to the areas not yet connected thereof and recovery of deteriorated pipelines and ducts in order to control and reduction of water loss.
As mentioned before, the creation of Study of feasibility and application for registration of the EU project "Zagreb – development of the water supply and sewage system". The creators of the Study will propose short term and long term development plan for water supply and sewage systems and, after it is accepted, an application for the registration of the project pursuant to the EU requirements, which will then go through the procedure of nationwide acceptance or approval, for obtaining funds from EU funds.
In 2014, construction of 17 km of new pipelines of various profiles, 20 km of ducts, 3 water tanks, recovery of 10 km of pipelines and 3.8 km od ducts and connecting 2,500 new consumers. The plan of measures for improvement of the management system includes shortening the deadlines for connection to the public water supply and public sewage, water meter readings and billing services optimization, records of illegal consumption and a decrease in the number of consumer complaints.
The business VIO will focus on the modernization of water supply and sewage in order to increase the standard of all consumers, quality functioning and further development of public water supply and public sewage system, the protection of water sources and ensuring a continuous supply of all consumers with water safe for the human consumption and proper sewage of all forms of wastewater and rain water. 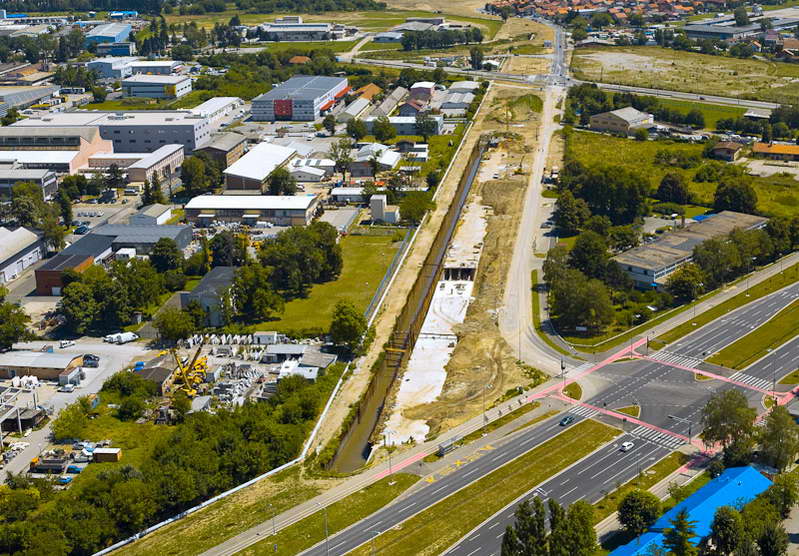